Hillary Clinton was the winner in a one-sided debate at Hofstra University in Hempstead, an Emmy award winning American political psychologist said, a verdict that was generally upheld by many debate watchers in America.

A CNN poll gave Hillary 62 per cent and Donald Trump 27 per cent. Eleven per cent were undecided.

“She looked smart, composed and presidential. She flashed a winning personality by being consistent, appealing to everyone and presenting as comfortable in her own skin.

“Trump had overly simplistic answers. He stayed on the defensive with the birther issue, bankruptcy and his tax returns. There was a lack of focus, no vision, limited knowledge and for first time, appeared agitated and uncomfortable: not presidential timber. There was essentially no appeal beyond his base. If graded: Hillary Clinton would get an “A minus” and Donald Trump, a “C,” he said.

“Hillary won the debate and Trump lost. He was rattled and she was not. She looked presidential and he looked way out of his league. I feel a helluva lot better about our chances of winning in November after tonight”.

“In his first debate with Jimmy Carter, Ronald Reagan famously calmed voters skeptical about whether he could cross the threshold of gravitas and look like a President. After that, election lore says, it was all over.

“While Donald Trump lost no hardcore supporters last night — to them, as has repeatedly boasted, he can do no wrong — he failed the Reagan test. His uneven, often rambling, occasionally passionate performance won’t win over wary and worried voters.

“Hillary Clinton was poised and prepared. She for once exuded a happy-warrior aura. She parried every thrust. She eviscerated his tax plan, a giveaway to the richest.

In Reuters report of the debate, Democrat Hillary Clinton accused Republican Donald Trump of racism, sexism and tax avoidance  during a heated presidential debate that could reshape the 2016 campaign for the White House.

For Trump, 70, the debate was a chance to appear disciplined. For Clinton, 68, it was an opportunity to reassure voters she could be trusted. It remained to be seen how voters would judge their performance.

In a sign investors saw Clinton as the winner, Asian shares recouped early losses on Tuesday and the dollar edged away from a one-month trough against the yen. Markets have tended to see Clinton as the candidate of the status quo.

In one of the more heated exchanges, the two candidates attacked each other for the controversy Trump stoked for years over whether President Barack Obama was born in the United States.

The president, who was born in Hawaii, released a long form birth certificate in 2011 to put the issue to rest. Only this month did Trump say publicly that he believed Obama was U.S.-born.

“He (Trump) has really started his political activity based on this racist lie that our first black president was not an American citizen. There was absolutely no evidence for it. But he persisted. He persisted year after year,” Clinton said.

“Nobody was pressing it, nobody was caring much about it … I was the one that got him to produce the birth certificate and I think I did a good job,” Trump said.

African-American voters overwhelmingly support Clinton, but Trump in recent weeks has said he believes his policy agenda would benefit them and said the policies of Obama and Clinton had failed to help black Americans.

He said Clinton’s arguments were disingenuous.

“When you try to act holier than thou, it really doesn’t work,” Trump said.

Clinton wore a red pantsuit, and Trump wore a dark suit and a blue tie to the encounter that could shift the course of the tight race for the Nov. 8 election. She called him Donald. He called her Secretary Clinton for much of the debate before switching to her first name.

Toward the end of the debate, Trump said Clinton did not have the endurance to be president.

Citing her own public record, Clinton retorted: “As soon as he travels to 112 countries and negotiates a peace deal, a ceasefire, a release of dissidents … or even spends 11 hours testifying in front of a congressional committee, he can talk to me about stamina.”

Each accused the other of distortions and falsehoods and urged viewers to check their campaign websites for the facts.

Clinton called the New York businessman’s tax policies “Trumped-up trickle-down” economics and Trump accused the former secretary of state of being “all talk, no action.”

“I have a feeling I’m going to be blamed for everything,” Clinton, the first woman to win the presidential nomination of a major U.S. political party, said during one tough exchange.

“Why not?” retorted Trump, a former reality TV star.

Clinton knocked Trump for not releasing his income tax returns and said that decision raised questions about whether he was as rich and charitable as he has said. She noted that the few years of tax returns he had released showed that despite his wealth, he had paid no federal income tax.

“That makes me smart,” Trump said.

“I have a tremendous income,” he said at one point, adding that it was about time that someone running the country knew something about money.

Clinton criticised Trump for failing to pay some of the business people with whom his company had contracted. She said she had met a lot of people who had been cheated by her opponent.

Trump said such incidents of non-payment had taken place when the work was unsatisfactory.

Trump attacked Clinton for her trade policies and said she would approve a controversial trade deal with Asian countries despite opposing it as a candidate.

“You were totally in favor of it, then you heard what I was saying, how bad it is, and you said, ‘Well, I can’t win that debate,’ but you know that if you did win, you would approve that,” he said.

“Well Donald, I know you live in your own reality, but that is not the facts,” she said.

Moderator Lester Holt struggled to rein in the candidates, with discussions about trade policy suddenly shifting to the fight against Islamic State as Trump accused Clinton of giving away information to the enemy by revealing on her website how she planned to defeat the group. Clinton said that unlike Trump, she at least had a plan for fighting Islamist militants.

Opinion polls have shown the two candidates in a very tight race, with the latest Reuters/Ipsos polling showing Clinton ahead by 4 percentage points, with 41 percent of likely voters.

A second Reuters/Ipsos poll released on Monday showed half of America’s likely voters would rely on the debates to help them make their choice.

Two other presidential candidates – Libertarian Gary Johnson and Green Party candidate Jill Stein – were not invited to take part in the debate because neither had obtained at least 15 percent support in national polls, the threshold established to qualify. 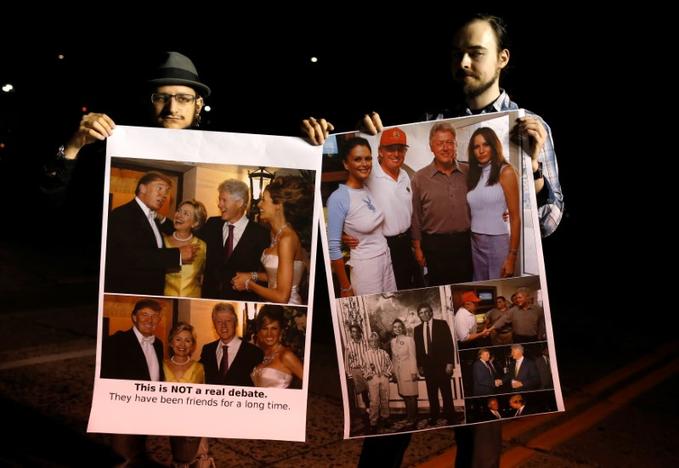 Related Topics:
Up Next

This site uses Akismet to reduce spam. Learn how your comment data is processed.

President Buhari sends messages to Nigerians on coronavirus, with approval of N5bn intervention fund and another N10bn request

America surpasses China, Italy to become most infected with coronavirus with 85,000 cases

Outrage as professor of medicine is accused of “colluding” with late Coronavirus patient to hide his travel history from doctors, nurses and burial attendants in Kwara

Breaking: Outbreak of new Hantavirus in China amid Coronavirus spread

Coronavirus: Man asked to go home and self-isolate after testing positive but no bed space for him

How I was manhandled by Police, DSS, others – Sanusi

President Trump approves use of Chloroquine in treatment of coronavirus